Making Men and Women for Others

The context we live in is so complicated and confusing for all. There is so much narrow-minded, regional, parochial, and ‘frog in the well’ type of thinking gaining momentum. There is polarisation on the one hand, and an utter ignorance of UN declaration of HR and in that India is a signatory, is on the other. There is also a great deal of neglect and ignorance on the wonderful values of Indian Constititutions among large sections of Indian citizens.  Considering the need for educating our kids for the future, we think, it is important to educate them about Global citizenship, Democracy, Constitutions and Human Rights.

What is Global Citizenship programme?

Worldwide immigration and quests for rights by minority groups have caused social scientists and educators to raise serious questions about liberal concept of citizenship that historically have dominated citizenship education in nation-states. Citizenship education should be reformed so that it reflects the home cultures and languages of students from diverse groups, and group rights can help individuals to attain structural equality.

When we look at the global scenario we see that over the past few decades, India has become a key player in Global affairs. The Constitution and Democratic set up with all its institutions of the country is recognised and appreciated worldwide. India is one of the youngest countries in the world, in terms of, percentage of vibrant young people in large number. Today we are called upon to become global players. Therefore, it is imperative for our education system concentrate on global citizens without losing their ‘Indianness’ as enshrined in the Constitutions of India.

The plan for Global citizenship programme in schools is based on the understanding that it should not become a project but a culture, a way of life in all circumstances in which the citizen of India exists.

Today every divisive ideology is targeting school education. ‘Catch them young’ is the slogan of many of these ideological groups and organisations. Text books and history is being re-written, New Education Commissions have been constituted, syllabus and courses introduced to suit their ideology. 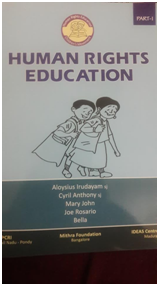 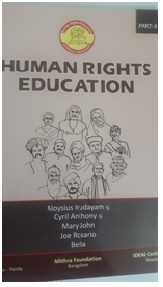 However, for a positive education, schools are the starting point from which it can permeate the lives of the teachers, families of the children, the communities to which the children belong. Therefore, imparting positive outlook, acceptance of all, to nurture and mature as good citizens of a responsible nation, etc. must be our priorities. When narrow-mindedness is gaining momentum we must show the right path to our children by upholding human values, based on diversity and harmony among all. To do this we have our Constitution of India as the source.

In the last few decades a number of International Charters and Declarations have been promulgated which India has accepted and ratified. It is with this objective that the Society of Jesus (Jesuits) in India, having been involved in drafting and promoting the Constitution of India (Fr. Dr. Jerome D Sousa SJ, was a member of the Constituent Assembly), now embarks on a programme of Global Citizenship, encompassing three dimensions.

Up on independence, India could have gone on a different way, if our leaders were not statesmen. The vast diversity of religion, language, culture, geography, and ethnicity and other socio-political reality of 1947 dictated our competent leaders to choose Democracy over Theocracy or any other form of Government. It was not a majoritarian rule; it was participatory and representative democracy, without having any discrimination of voting power.

Despite the wounds of partition which surcharged the atmosphere with communalism, the freedom fighters and our enlightened leaders preferred to build India into a secular democratic nation, respecting all sorts of diversity. It was not an easy choice. It emerged from a forgiving attitude, a truly spiritual perspective.

Today, there is a big fight between egalitarian democracy and religious and caste based patriarchy. Although Caste system is an integral part of Indian society, the framers of the Constitution ignored it and strongly affirmed equal rights and acted pro-actively in removing the Caste disabilities by adopting the reservation system based on social justice. Gender equality too was promoted.

Economic inequality in the distribution of resources that India faced at the time of independence and the poverty the vast majority suffered was well understood by the framers of the Constitution. Hence the following provisions found prominent place in the Constitution: “Justice: Social, economic and political in the preamble; Right to equality (Art. 14-19), Right against Exploitation (Art. 23-24) Socio-economic directives in the Directive principles of State Policy.

Thus, one must understand the farsightedness of the framers of the Constitution for a new India, with a new vision. It is against the social realities of Caste and Communal set ups. The idea of India, therefore, cannot be the old order, but a new order where Constitutional values are practiced at all levels.

As a Sovereign, Socialist, Secular, Democratic Republic, that is India, endowing every citizen with inalienable dignity and rights.

In the context of a neo-liberal market economy, caste communalism, religious fundamentalism, patriarchy, echo-inventiveness etc. violating the fundamental rights of the citizens, especially the marginalised and natural environment we need to think of educating our students the rights and duties as human beings in a global society. Thus Global Citizenship, Democracy, Constitutions and Rights Education in schools are an unavoidable urgency.  We urge all positive thinking educators to make Global Citizenship and Constitutional education a reality in our schools. Remember we cannot be mute spectators when the idea of India itself is in danger.

(The author is the Secretary, Jesuit Education South Asia(JEASA), and National Adviser to Jesuit Alumni Association of India (JAAI))